LIFE ECOdigestion 2.0 project shows its commitment to the environment on World Wetlands Day 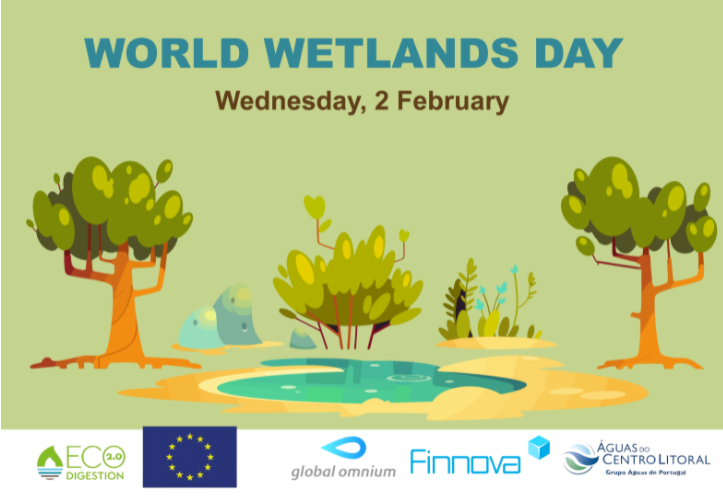 In recent years, climate change is causing the loss of species and ecosystems due to droughts, floods and other extreme natural disasters. To raise public awareness of these phenomena, World Wetlands Day is celebrated on 2 February, with the aim of raising awareness of these ecosystems with great biological diversity, regulators of the water cycle and climate and generators of water resources in order to prevent their loss and promote their conservation.

Wetlands are home to a large number of animal and plant species, regulate the water cycle and climate and contribute to climate change mitigation. Despite this, almost 90% of these land areas have been degraded over the last three centuries and it is estimated that more than 50% of the world’s wetlands have disappeared since the 1980s.

In this context, the LIFE Ecodigestion 2.0. project is committed to the circular economy model based on an automatic control system for the dosing of organic waste in anaerobic digestion of waste water treatment plants, with the aim of maximising the production of biogas, producing green energy. The process of the project system respects nature and maintains its balance, as the sludge treatment is more efficient and sustainable. In addition, this dosing system makes the generation of sewage sludge more efficient, reducing the pollutant load of water and greenhouse gas emissions, both of which are directly connected to the sustainability of life within the wetlands.

This contributes to the achievement of Sustainable Goal 6, ensuring availability and sustainable management of water and sanitation for all; Goal 13, focusing on urgent action to combat climate change and its effects; and Goal 15, based on the life of land-based ecosystems.